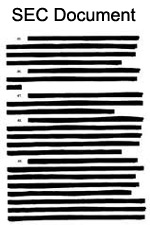 Having a government gig can be hard work. It also can be lucrative and easy work for some. For Security Exchange Commission (SEC) employees, the gig just got a bit easier since they no longer have to deal with the public or news organizations filing freedom of information requests.

The SEC cited the new law Tuesday in a FOIA action brought by FOX Business Network. Steven Mintz, founding partner of law firm Mintz & Gold LLC in New York, lamented what he described as “the backroom deal that was cut between Congress and the SEC to keep the  SEC’s failures secret. The only losers here are the American public.”

If the SEC’s interpretation stands, Mintz, who represents FOX Business Network, predicted “the next time there is a Bernie Madoff failure the American public will not be able to obtain the SEC documents that describe the failure,” referring to the shamed broker whose Ponzi scheme cost investors billions.

The SEC didn’t immediately respond to a request for comment.

Let’s get this straight off the bat. This is not a Fox News attack. Fox Business is specifically referencing what the SEC is referencing as current law, enacted when President Obama signed the stupid financial “reform” legislation bill last week.

Will other news outlets look into the 2,000+ pages of legislation to find out if the SEC can now ignore FOI requests? My guess is they will, as soon as they file one of their own someday.

None of these would have happened without FOIA.  Government has only one purpose in issuing FOIA exemptions — opacity.  Some functions in government require secrecy, but those should be limited to acute national security operations and other such public-safety tasks (such as raw FBI files, for instance).

The government part of the Madoff scandal

Wikileaks to the US Military: Hey! We need your help to rat on your friends

Wikileaks: Do they care information could put Afghans in danger?
Scroll to top