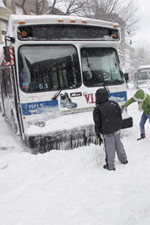 Much has been written about the travails of New York State.  With each year of budget deficits, the solution always seems to be to raise tax rates.  Higher tax tax rates cause people to leave the state, resulting in fewer taxpayers and thus less tax revenue and ever increasing deficits.   So, it came a no surprise that the results of the recent census have caused New York to lose 2 seats in the House of Representatives.  With these stark realities, one would think that New York would be doing whatever it could to lure more business into the state.  Sadly, it is doing the exact opposite.

One needs to look no further than New York’s treatment of natural gas drilling.  The  65 million acre Marcellus Shale formation,

extends from Ohio and West Virginia up through Pennsylvania and upstate New York.  A recent Penn State study estimates that Marcellus is the second largest natural gas field in the world…A July study by the American Petroleum Institute estimates production in the Marcellus could provide [New York with] $15 billion in economic output and $2 billion in state tax revenues over nine years.

In response to this “gold mine” the New York legislature recently passed a bill banning all natural gas exploration in the state.  Although out-going Governor Patterson vetoed this bill, by executive order he was able to accomplish the same result.  His order bans all horizontal drilling (the most cost effective way of extracting natural gas) until his state’s Department of Environmental Conservation issues new regulations.  Were I the natural gas industry, I wouldn’t be holding my breath til the regulations are promulgated.

Meanwhile, in neighboring Pennsylvania, things are quite different.

And, from where will New York State, one of the largest users of natural gas in the country, get it’s natural gas?  Pennsylvania is now looking to lock in contracts with businesses in New York.

This type of policy, driven by the “greenies”, gives brand new meaning to the phrase “shooting yourself in the foot”.