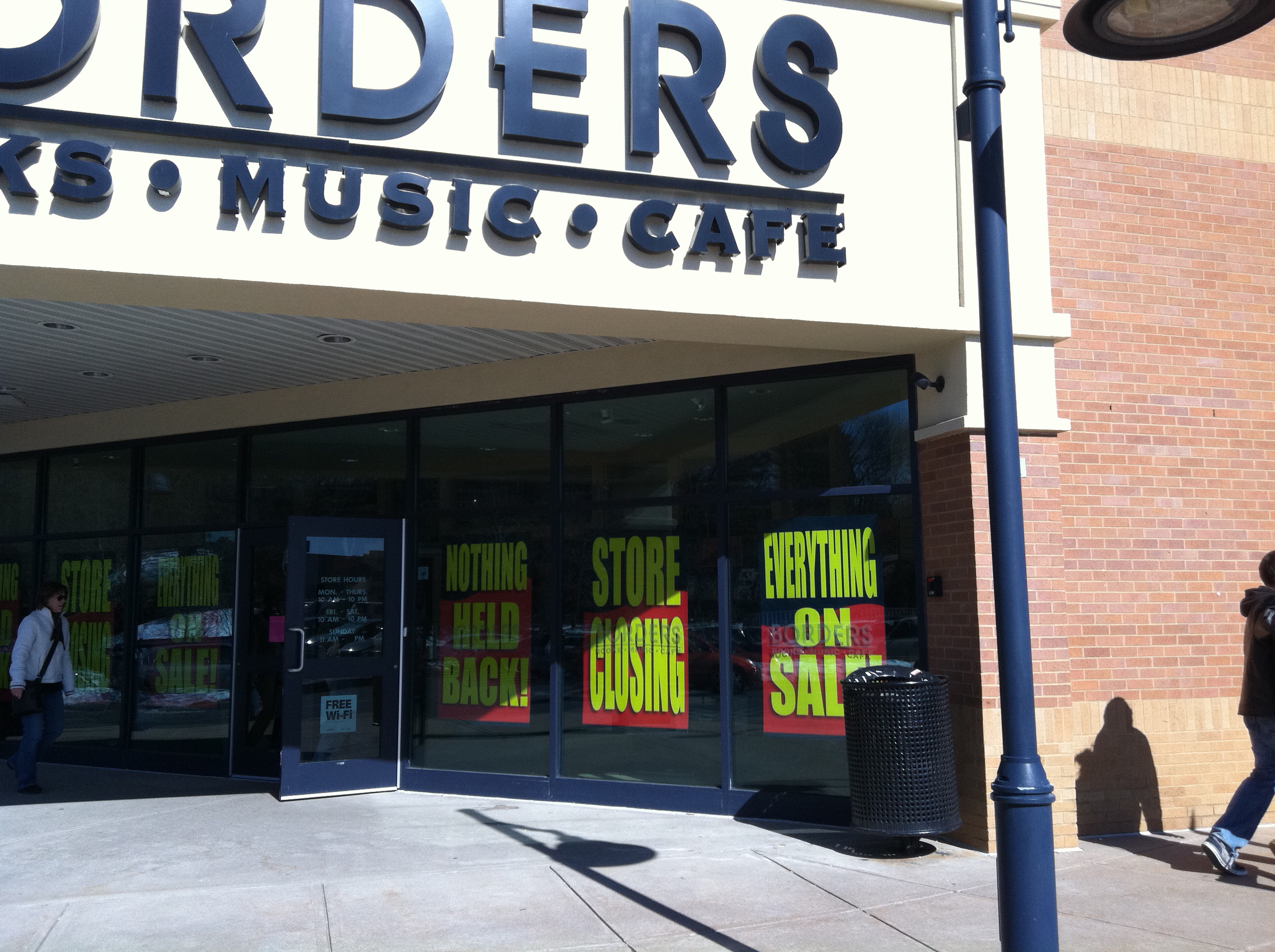 We have heard repeatedly from Washington and Hartford that it will take shared sacrifice to solve the fiscal problems facing our states and the nation. But somehow when it comes to the public sector shared sacrifice means taxing the private sector and at most “freezing” spending and reducing already generous benefits in the public sector. Well let’s take a look at some of the sacrifices already made in the private sector.

As I drove though Avon today, I noticed this sign on the local Borders store. The store will be closing and no doubt costing some their jobs, 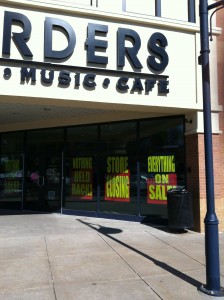 Overall almost 200 stores could be closed in what is being called the largest Chapter 11 bankruptcy for a book retailer. Borders is pretty frank about why this happened. They had become a dinosaur. Relying on bricks and mortar when the world was moving books faster and more efficiently on line. From the Washington Post:

The iconic bookstore chain, founded in 1971 by brothers Tom and Louis Borders, filed for Chapter 11 bankruptcy reorganization this morning, weighed down under crushing debt and unable to successfully navigate rapid changes in consumer behavior.

In: e-books, downloaded whenever, wherever.

It is just one example of how this recession weans out the weak and slow and inefficient. It is the price companies have paid throughout the private sector as available revenue decreased forcing companies to downsize to survive.

When it comes to shared sacrifice, the private sector has assumed  the sacrifice for the last two years, by cutting staff (CT and US unemployment 9%), reducing benefits, and demanding more from fewer employees, while the private sector has shared the private sectors income. The result has been either a strengthening of the balance sheet, or, as in Border’s case, a Chapter 11 filing, Meanwhile government budgets ballooned at worst … status quo at best.

At the Federal and Connecticut government level the response has been to tax more in hopes of maintaining current public sector job levels, pay levels and benefit levels, even as the private sector, which can’t confiscate money, continued to cut. And there is a good chance that if  either Obama’s or Malloy’s budgets go through, businesses will either be forced to cut further, or possibly move more jobs out of Connecticut. Companies like UTC, Aetna, and UI have warned the Democrat controlled government that the cost of doing business in Connecticut is prohibitive and unless it changes it’s overtaxing ways, the state will lose more businesses. Pfizer has already chosen to move. Who will be next?

Governor Malloy says his new tax structure, more than $2 billion in tax increases over two years, is still competitive with surrounding states. That is 1980’s economics. Today Connecticut competes, not with Massachusetts and New York, but no income tax states like Florida, Tennessee, and Texas.

The taxes are set, but union concessions are not and it’s not likely state union employees will concede $2 billion without a big fight. The Democrat Governor is playing a dangerous game in the name of shared sacrifice. The private sector has already paid. It’s time for government to shrink to an affordable size before private “working people” pay one more cent.

The next time a government worker calls for shared sacrifice … show them that picture above.

Is bankruptcy court in your city’s future?

What happens when you run out of other people’s money?

GM decides to “invest” in Europe

The opposition we need: Doctor Zero speaks on thuggery and the silence of the left
11 replies

RVO housekeeping: Stories from a DNS migration
Scroll to top