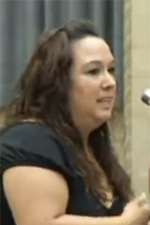 Sure, this is a local government official and not a national politician, but it was funny and the story points out many who are making ‘boycott Arizona’ demands have not read the legislation are are not at all familiar with the situation in Arizona.

First, the video of Milwaukee County Board Supervisor Peggy West who approved of the suggested Milwaukee boycott of Arizona. She would have given more consideration to disagreeing with the boycott if Arizona was more like Texas … and shared a border with Mexico. <rolleyes>

I have confirmed Arizona shares its entire southern border with Mexico. All 389 miles of it. That said, this post is not designed to make fun of one graphically-challenged county board supervisor, rather point out – again – that the bureaucrats and politicians making the decision to boycott Arizona have not read the law, or understand what is going on.

The video is courtesy StandWithArizona, with a hat tip to Michelle Malkin.

Dear Supervisor West:
I understand that, when speaking about Arizona’s new immigration law at a Supervisors’ meeting recently, you said:

“If this was Texas, which is a state that is directly on the border with Mexico, and they were calling for a measure like this saying that they had a major issue with undocumented people flooding the borders, I would have to look twice at this. But this is a state that is a ways removed from the border.”

You will be interested to learn that Arizona does indeed share a border with Mexico. I have enclosed a map for your convenience.

I hope you will take the time to actually read the Arizona law before formulating an opinion about it and become familiar with our country’s geography and the challenges that our border states face.

Oh what a tangled web we weave…
10 replies

Quote of the week: “It is reprehensible that anyone would use taxpayer...

Odds and ends
Scroll to top