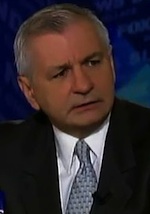 Democrats are having a real tough time finding their bearings on the Ground Zero Mosque and I think it’s because they know how weak their stand for the mosque is. Not weak constitutionally (although in this case the Constitution disappears) … weak morally, and when your world revolves around moral relativism, your argument ends up with plenty of holes. Like this one.

Senator Jack Reed on Fox news Sunday tells Chris Wallace America has a great tradition of “tolerating” differences in religion. Then, amazingly enough, he says while the mosque should be built, it should be built only if the discourse there is positive.

Not only the does First Amendment completely disappear in this argument, on two grounds (we do not tolerate religion, it is a guaranteed right and free speech is free speech. It is not deemed permissible based it’s positive or negative tenor), it is a perfect example of how, when you are trying to make everyone happy … your argument quickly falls apart, and apparently so does the Constitution.

And that’s the point. There is too much evidence that mosques have been used to not just propagate hate toward Jews and Americans, but have also been at times ground zero for terrorism fund raising … around the world. But as big as that issue is, you can’t condemn each mosque just because it’s a mosque.

The best reason for not building the “ground zero” mosque because it offends sensibilities, of Americans, of 9/11 family members, of survivors. It’s like rubbing salt in a wound. The Imam says he wants to build bridges. He could start by not building next to ground zero.

A quick note from the blog bosses

Obama: For the mosque … before he was agin’ it. UPDATE: Andrew McCarthy...
Scroll to top