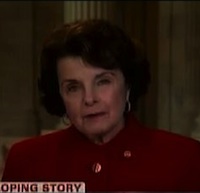 We’re screwed when the chair of the Senate Intelligence committee starts to slice the baloney this thin. The conversation between Wolf Blitzer and Sen. Dianne Feinstein is a real eye-opener as far as I’m concerned. The topic is whether Pakistan knew about the whereabouts of Osama bin Laden and helped hide him. But it quickly degenerated into a much more revealing comment.

As the interview continued, Wolf pressed the Senator from California about whether Pakistan might be hiding other key members of Al Qaeda. Her response is revealing. No, she says, Pakistan’s not hiding anyone, it’s just helping them?

There’s little question that there’s plenty of friction between Pakistan and the United States, even with the young president, who promised better relations with Iran allies. At best we could say that relationship is deteriorating. But to draw this kind of distinction, in a sense continuing to make excuses for Pakistan’s behavior, doesn’t make us safer.