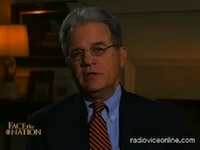 Dr. Tom Coburn is hardly an unreasonable man. In fact in most cases during this current legislative session he’s been the very voice of reason. He’s yet another in a long line of believers in putting into place, or at least into motion, a balanced budget amendment. But when he told Bob Schieffer the reason we needed one, I was a little shocked. And I can’t say that I disagree with him.

We keep hearing from the mainstream media that a balanced budget amendment has no chance of going through, or will just plain take too long to have any effect on the current debt crisis. But conservatives are just concerned with the current deficit, very concerned with the growing debt that promises to turn the United States of America into Greece in another 10 to 15 years unless something is done to stop it.

So Coburn makes the case for cut, cap, and balance, which will be introduced on Wednesday in the House. He makes the point that cut will take care of the growing deficits, cap will limit government, while the balanced budget amendment will make sure we never get in this position again. As Coburn says if you don’t catch this into stone politicians will break their promises.

It’s kind of heartbreaking to think that we have to make it an amendment to the Constitution to force our legislators to behave like adults. Does that mean that the moment we have no adults in the room?

The debt ceiling, and something to think about
Scroll to top