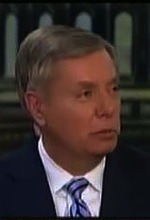 The Senate will finally take up Obamacare repeal legislation today … but on the table is so much more than repeal. It is a “Three pronged attack”, says Lindsey Graham, to finally drive a stake through a very bad bill.

A day after a federal judge ruled the law unconstitutional, Senate Minority Leader Mitch McConnell, R-Ky., introduced the House-passed bill on repeal as an amendment to a pending measure on aviation issues.

“If everyone in this chamber evaluated this bill for what it is, we’d repeal it right now,” McConnell said. “And then we’d begin the work of achieving our mutual goal of delivering health care at a higher quality for lower costs.”

Senate Majority Leader Harry Reid, D-Nev., armed with a 53-47 voting advantage, agreed to the vote on the repeal bill. He said he wanted Republicans “to get this out of their system quickly.”

McConnell has the support of all 47 GOP senators, but it is unclear if any Democrats will join them.

But  Lindsey Graham said it won’t be the only effort to stop Obamacare.

Republican Senators Lindsey Graham (S.C.) and John Barrasso (Wyo.) introduced a bill on Tuesday that would allow states to opt out of any part of the controversial new health care law, known as Obamacare, including the individual and employer insurance mandates.

Senator Graham was unequivocal in describing the new bill as a “third front” against the unpopular reform, saying he hoped enough states would opt out to effectively kill the law.

How would this end Obamacare, you ask? As Graham told Gretta last night, his bill would starve Obamacare and force Congress to start over.

I admire his tenacity … but will this pass either?

UPDATE: The attempt to repeal Obamacare failed in the Senate just about 20 minutes ago. I am not surprised that it failed. I am surprised that the Democrats held together. Final vote 51-47, with all current Senate Democrats on the record as being for Obamacare.

Democrats had new ammo. They accused the GOP of, in the words of Sen. Barbara Milkulski, D-Md., “playing to the Tea Party.” They waved around a January CBO estimate of health care repeal like a bloody flag.

“$1.4 trillion!” said Sen. Kent Conrad, D-ND, closing the debate for the Democrats. “Now, we’ve heard colleagues of all sides say we’ve got to get our debt and deficits are out of control, and one of our first acts here is to explode the debt!”

Republicans had new ammo. They pointed to polling that proved health care was unpopular, and citizens’ complaints about what would happen to their care. They laughed off the CBO score.

“Only in Washington,” said McConnell, “could you argue with a straight face that starting a new entitlement program will save money.”

But the kabuki ended with a party-line vote.

It’s a pretty nice post and yes I am disappointed. I was expecting at least one or two Democrats to join the Republicans. Instead the battle lines are drawn and, with so many Democrats up for re-election in 2012, it will be interesting to see how this plays out.

In the first round of The Cook Political Report’s 2012 Senate ratings, Democrats start with three incumbents whose races are classified as toss-ups: Ben Nelson in Nebraska, Jim Webb in Virginia, and newly elected Joe Manchin in West Virginia. Three Democrats are in the “Lean Democratic” column: Bill Nelson in Florida, Claire McCaskill in Missouri, and Sherrod Brown in Ohio. To that list you can add independent Joe Lieberman in Connecticut, who sits and caucuses with the Democrats. So, that’s seven incumbents in races expected to be competitive.

UPDATE 2: I forgot to point out that the Senate did vote to repeal the 1099 requirement in Obamacare, which was nothing more than searching through the seat cushions, so to speak, to find additional cash to fund Obamacare. That vote was 81-17 and not surprising. Businesses were not happy with this provision that required accounting to file a 1099 anytime they did more than they did more than $600 dollars.

Large companies hated the additional paperwork. Small businesses recognized it for what it was. Nickel and diming the small business sector.

The Honeymoon Is Over?

Outside Opinions: Does the BBC get it?

“We’re all Obama people” – Will they illegally share private information with campaigns?

Obamacare will go to trial in Florida Update
6 replies

Charles Krauthammer: Gibbs and Biden should be under house arrest until Egypt...

Matthews: The Tea Party is just like Muslim Brotherhood-“nutbags̶...
Scroll to top