Sen. Roland Burris (D-Ill.), who was appointed to President Obama’s vacant Senate seat by the nutty former Governor Rod Blagojevich (D-Ill.), probably should pack his bags and head back to the political hack-world of Chicago this weekend.

Drive yourself home, or walk if your ego is too damn big to be a lowly passenger on a commercial flight Burris.

Back in January, Burris submitted a sworn affidavit stating he only spoke to one person about the appointment, one time and it was only in passing. Within days, holes were turning up in his story and he started to change his out-of-key tune.

Burris initially gave the committee a sworn statement Jan. 5 that indicated he had no contact with any Blagojevich representatives about the appointment before Dec. 26. Testifying three days later, Burris altered his earlier account by acknowledging speaking to former Blagojevich chief of staff Lon Monk about his interest last summer.

Then, in a huge turnabout, Burris gave the committee the Feb. 4 affidavit, stating he spoke to five other Blagojevich insiders about the job, including the ex-governor’s brother.

As Jim Geraghtey noted back in February…

There’s quite a bit of space between “I spoke to one person, once, and only mentioned the position in passing” and “I spoke to six representatives and had at least four phone conversations, made a hard pitch for the job, and tried to do some fundraising for the governor.” 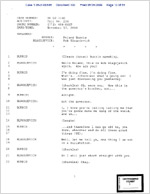 On Tuesday, a judge approved the release of FBI a wiretapped conversation – legally obtained – between Blagojevich’s brother and Burris just weeks before the governor was arrested. Click on the image to see the actual transcript (10 pages) or check out the full 55 page document dump courtesy the Chicago Sun Times.

You read it and tell me what you think. President Obama was elected Nov. 3, the conversation was recorded Nov. 13, Blogojevich was arrested Dec. 10, and he appointed Burris Dec. 30.

Ed Morrissey at Hot Air has a pretty good wrap-up.

Burris has more to fear from the US Attorney than the Ethics Committee.  All they can do is toss him out of the Senate, which it appears they will want to do quickly in order to allow Democrats to hold the seat in the next election.  The US Attorney wants a crack at putting Burris behind bars for perjury and obstruction of justice, and the conversation may give him overwhelming odds at success.

Let’s not let stuff like this fall off the back burner. There are way too many things to write about and absolutely no time to write about them… I think liberals and Democrats like it that way.

How much is Chicago paying for police bodyguards to protect aldermans?

So, what does Obama think of Chicago’s school voucher proposal?
1 reply