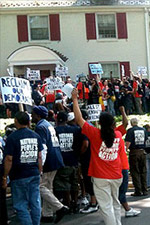 I’m serious. Are you OK with the tactics the SEIU leadership – and 500 members – took when they headed into a residential area to “protest” at the home of Greg Baer, deputy general council for corporate law at Bank of America? They did not just protest. They surrounded the house, got on the porch, used bullhorns and started screaming. Pure intimidation.

Unfortunately, the teen son of Baer was home alone at the time. He had to lock himself inside the bathroom and wait for help that would not be provided by the police.

The media and talking head liberals have remained quiet about this mob surrounding the home of a bank executive and terrorizing a teenager eight days ago, but they continue to express concern about TEA Party protests around the country and suggest they set a bad tone.

Are they friggin’ kidding me?

These SEUI members are the mob of our time. That’s right, I said members. Sure, leadership gurus like former SEUI president Andy Stern – who by the way now sits on the president’s Fiscal Responsibility Commission – may be egging the members on, but this intimidation purely falls on the membership who did this.

You terrorized a teenage kid in his home. Feel big and powerful? Proud of yourselves? Thugs … all of you.

Nina Easton, Washington bureau chief for Fortune, Fox Contributor and neighbor of Baer, recalls the mob scene and provides us with the image. Click to enlarge. 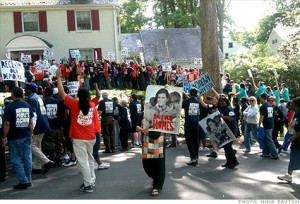 Waving signs denouncing bank “greed,” hordes of invaders poured out of 14 school buses, up Baer’s steps, and onto his front porch. As bullhorns rattled with stories of debtor calls and foreclosed homes, Baer’s teenage son Jack — alone in the house — locked himself in the bathroom. “When are they going to leave?” Jack pleaded when I called to check on him.

Baer, on his way home from a Little League game, parked his car around the corner, called the police, and made a quick calculation to leave his younger son behind while he tried to rescue his increasingly distressed teen. He made his way through a din of barked demands and insults from the activists who proudly “outed” him, and slipped through his front door.

“Excuse me,” Baer told his accusers, “I need to get into the house. I have a child who is alone in there and frightened.”

In the 1990s, the Baers’ former bosses, Bill and Hillary Clinton, denounced the “politics of personal destruction.” Today politicians and their voters of all stripes grieve the ugly bitterness that permeates our policy debates. Now, with populist rage providing a useful cover, it appears we’ve crossed into a new era: The politics of personal intimidation.

Easton – because she simply took a picture and wrote about what happened – has become a secondary target for the SEIU. Disgusting intimidation.

Change we can believe in … or else
4 replies