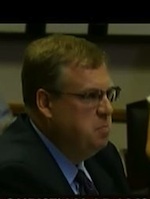 Remember the video of the New Black Panthers standing outside a polling place in Philadelphia in November 2008? They were the ones in military style uniforms blocking the door, and, carrying night sticks. What has happened since is truly amazing.

In early January, 2009, the Department of Justice brought charges against them under the voter intimidation statutes of the 1965 Voting Rights Act.  And, when none of the defendants appeared for trial, in April, 2009 the court entered a default judgment against them.  All that remained was a hearing by the court to pronounce sentences against the defendants.  Then, strangely, in May, 2009 the Department of Justice dismissed the charges.

We are now hearing from J. Christian Adams, one of the DOJ attorneys who handled the matter, and, what he is telling us isn’t good.  First he claims that two Obama political appointees to the DOJ ordered that the case be dismissed.  And then he tells us that a mandate has been issued in the Civil Rights Division of DOJ that henceforth, the Civil Rights Division will no longer prosecute any voter intimidation case where the defendant is black, and the victim is white.

Listen to what Mr. Adams has to say, and make up your own mind.