Today, the President honored the undefeated 1972 football Dolphins in the White House.

Egypt, one of our allies in the Middle East, is burning and the President seems to have no cogent response.

We are almost 1 year after Benghazi, and the American public has not only not received a truthful accounting of the events, but also has learned that witnesses are being hidden by the administration.

Russia has snubbed its nose at this country by granting asylum to Edward Snowden, the NSA “secrets leaker”.  And, what was the NSA actually doing to or with Americans’ communications anyway?

The IRS has disclosed that it targeted Americans because of their political beliefs, and the IRS official in charge of this program has “taken the 5th”, as truthful answers before Congress might incriminate her.

Meanwhile, after a strenuous week of vacation on Martha’s Vineyard, the President is honoring the 1972 Dolphins.

What am I missing here? 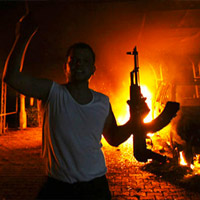 Laws, who needs them, I’m the President
22 replies

Refuse to photograph a gay wedding? Pay up!
Scroll to top