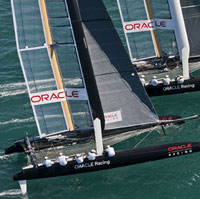 Indescribable. Loony tunes. Complete waste of tax dollars. Those three phrases don’t do justice to San Francisco’s plan to spend $150,000 in tax dollars to study the effect sailboats have as they quietly cruise by and scare Bay-area fowl.

The San Francisco Bay Area will be the home of the America’s Cup in 2013, and like all organizations and events who don’t want to offend the greenies, they actually have a published sustainability plan.

As a reminder, the America’s Cup is a sailboat race, and even though there are plenty of carbon-spewing watercraft, trucks, aircraft and other vehicles supporting the event … the race boats run on wind power.

The sustainability plan includes, in part…

The Authority, the City and the Committee intend that, if San Francisco is selected as host city for AC34, the Event will be a carbon neutral and zero waste operation and will emphasize resource sustainability and environmental stewardship. As appropriate, the Authority will endeavor to meet or exceed LEED or LEED-equivalent ratings pursuant to Chapter 13C of the San Francisco Building Code for permanent Event buildings.

That said, holding an event that will be promoted as carbon neutral and zero waste – completely impossible in my view – offers a great opportunity for someone, somewhere to make some money. And it’s even better if taxpayers are footing the bill.

To keep the big America’s Cup contest afloat, San Francisco has agreed to spend $150,000 to study whether the racing boats – and their towering sails – will scare birds on the bay.

The study, which will be conducted by the U.S. Geological Survey, is part of a settlement of a lawsuit…

You get the picture, and of course the lawyers involved got paid off by the city too.

In addition to spending $150,000 on the bird-disturbance study, the city will come up with $75,000 for another type of bird – the legal eagles who filed the suit and could have tied up the America’s Cup for months.

Soon, there may not be an app for that