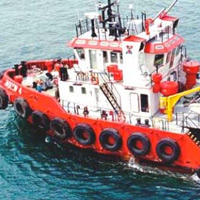 For your weekend “I survived” post… Six days ago a tugboat in operation about 15 nautical miles off the coast of Nigeria capsized and sank. A cook on the vessel went down with the ship to 100 feet and survived down there two days before he was rescued.

The news comes from gCaptain, a maritime and offshore news website dedicated mostly for maritime professionals.

… tragedy struck offshore Escravos, Nigeria on Sunday 26 May when the anchor handling tug Jacson 4 sank in heavy weather. Divers recovered 10 bodies from the sunken ship and 1 is still missing.

Miraculously however, the ship’s cook, Mr. Okene Harrison, was found alive after spending roughly two days inside the sunken vessel at a depth of 30 meters.

For those of you who know anything about diving, spending two days under water at 100 feet makes returning to the surface a long process. Divers breathing compressed air can spend about 20 minutes at that depth before they need to ascend to shallower depths. That limit allows recreational divers to pretty much swim slowly – but directly – to the surface and avoid decompression sickness (the bends). Assuming the air space Harrison had inside the overturned hull would sustain him for the two days, the problem lies with getting back to the surface.

“The fact this person survived is incredible,’ commented former US Navy Salvage Officer Patrick Keenan. “After spending two days at 30 meters of depth, he had become saturated, meaning his body had absorbed all the pressurized gases and equalized with the surrounding water pressure. Bringing him to surface from that depth, and after having been saturated at 3 or 4 atmospheres, could easily have killed him.

“All on board could not believe how cool he was when being rescued. The divers put a diving helmet and harness onto him and he followed the diver to the bell were he was then taken to deck level and kept in the chamber and decompressed for 2 days. It was amazing to be part of this rescue and my sympathy is with the families who lost there love ones.”

“Mr. Harrison has been brought to the surface safely and he continues to respond to treatment,” noted Sea Trucks Group in an emailed statement on 31 May.