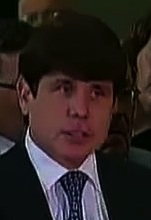 My heart aches on this one. Have the American people become so jaded that people are just willing to say … “Well, that’s just politicians do.” Depression.

Two videos for your approval. First Charles Krauthammer details how the Federal prosecutor just blew the Blago case, especially after making such a big deal about the litany of crimes Blago was accused of. The he adds the money line …. most people in Chicago just accept this stuff. Sigh!

OK, let’s update. Blago is caught on tape saying he has gold in that Senate seat and he’s just not giving it away … and one juror just isn’t sure. This my friends is how far we have fallen.

Read AP’s take on that juror at Hot Air.

According to the foreman, they actually reached a conviction on a second count related to extortion — before one juror backed out, leaving them deadlocked again at 11-1. They spent the whole summer at trial and fully two weeks deliberating, and still: 11-1. Quote:

Juror Jesse Blue returned to his Matteson home around 6:30 p.m. Asked if he was happy with the way the trial turned out, Blue said: “No, but I’m not at this time prepared to give a statement.”

No wonder Fitzgerald’s ready to retry the case. If he can idiot-proof the jury this time, he’ll probably put Blago away for years.

Obama sends troops to border – Krauthammer: Get the unemployed to work, complete the fence

Krauthammer: It’s not a scalpel or a hatchet, or even a Q-Tip

Obamacare … to defund or not to defund? UPDATE: Revolution on the right?
7 replies

On the job: Pelosi wants an investigation into the people … opposed to...