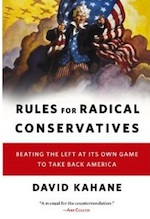 It is an amazingly funny book penned by this former radical, turned conservative. Want to know how to beat the lefties at their own game … read the book. And David Kahane is a guest on the show today. We’ll get to the bottom of this radical’s newest book.

The book is written by a former disaffected  Hollywood screen writer and is in fact, my friend and successful Hollywood screenwriter Michael Walsh. The book just out yesterday has already received rave reviews (well, except from the left) as he takes the reader through the mind of lefties, and how the righties can use the same strategies the left employs, to take back America.

Here are come of things already being said about the book:

“A manual for the counter-revolution.”
—Ann Coulter

“A deadly—and deadly funny—dissection of the people who brought us to this critical moment in America’s history, and how to take them down. Witty, smart, and right on target, David Kahane’s  dismantling of the Left from the inside will
have patriots everywhere cheering.”—Mark Levin, author of the #1 New York Times bestseller Liberty andTyranny

“Most tough guys aren’t funny, and lots of funny people are wimps. Kahane is a funny tough guy. It’s a rare combination, and one to be cherished. And his toughness is an intellectual toughness in the service of freedom—even better.”—William Kristol, editor, The Weekly Standard

“David Kahane is a screamingly unique phenomenon. He seems to know too much about the other side to be a right-winger, but too willing to reveal truth to be a left-winger. In short, he makes everyone uncomfortable, but in the end is so Right. He’s just different enough to shake up and wake up politics, with clarity and hilarity.”—Kathryn Jean Lopez, editor, National Review Online

“David Kahane has never seen an important fight he didn’t want to join, and to this most important of all fights he brings along his full arsenal: the singular attention to detail, the grasp of the big picture, and the surgeon’s scalpel of wit. Here is a desperately needed clarion call for conservatives.”—Andrew C. McCarthy, author of The Grand Jihad

You can buy the book there or here at Amazon.

KATHRYN JEAN LOPEZ: I was around at David Kahane’s conception, and yet I don’t think I could answer this question: What was the moment where you knew you had to bring Kahane to life?

MICHAEL WALSH: Oddly enough, “Dave” started life because I wanted to explain the ways of Hollywood to the Right. There’s a lot of suspicion of the creative community among the wingnuts, including the notion that conservatives are uniformly “blacklisted” in Hollywood, and while that may be true in some cases, it’s not necessarily a Tinseltown-wide conspiracy. Are most people in Hollywood left-liberal? Yes. But given a choice between the lefties in academe and the liberals in Hollywood, give me L.A. every time. They’re some of the smartest and most accomplished people I know, and they’re a lot better looking.

OPEZ: Why didn’t you just play it straight from the beginning? You’re Michael Walsh. You’ve worked in Hollywood. You know how liberals think. Why not have Michael Walsh tell us?

WALSH: Because nobody would have cared to hear yet another author/screenwriter whining about what a tough racket Hollywood is. Far more fun to invent an alter ego like Dave, a complete idiot who never understands that the joke’s always on him. I also find that you can speak the truth more bluntly when you disguise it with humor.

LOPEZ: How much of David Kahane is Michael Walsh?

WALSH: None. I type what he tells me to type. But, although he’s a goofball, he’s a very wise young man. Handsome, too.

LOPEZ: And you’re hoping Tim Robbins will play David Kahane in the movie version of Rules for Radical Conservatives?

WALSH: I think he would make a very good Kahane, although he’s too old for the part. Someone like Michael Cera would be perfect ten years older and 50 pounds heavier.

Funny interview … read it all.

Luntz: We’re gunna have one hell of an election I promise you that ….

N.J. Democrat: How about $500 per year to exercise 2nd Amendment rights?
Scroll to top