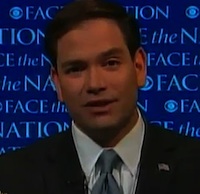 Face the Nation anchor Bob Schieffer confronted Marco Rubio (insert “Hail to the Chief” here) with his statements that the economy is worse since Barack Obama took office, and according to Rubio is the direct result of Obamanomics. you might expect a Republican to back down or back off, but not these days and not when it’s Marco Rubio. We pick up the conversation with Bob Schieffer asking Rubio if he really believes that Obama and his policies are the reason the economy hasn’t recovered. Rubio’s answer, you betcha.

When it comes to the question of George Bush, a standard in any mainstream media interview, Rubio cuts right to the heart of the matter: “But when does it start to get better Bob?”. but just so we can be perfectly clear about this George Bush is only contribution to the situation that we’re in right now is minuscule compared to what this president has done to America’s debt crisis.

As for the cause of the crisis, the collapse of the housing industry, I grow weary of  going through this but I will do it one more time. As we pointed out here and here, Bush went to Congress 17 times to plead with Democrats to do something to reform Fannie Mae and Freddie Mac. His last attempt was blocked by none other than former Sen. Christopher Dodd (D, Countrywide), who threatened to veto any substantial changes in Fannie Mae. And make no mistake Fannie Mae and Freddie Mac are ground 0 when it came to the financial crisis.

As for deficits, there is no question that the Bush eight years added to the federal debt. But when you look at this chart you’ll see that his deficits were in fact declining until the financial crisis hit, while the young presidents deficits have consistently topped $1 trillion.

So no, this economy belongs to Barack Obama, as even he admitted in 2009.

Senator Coburn: Of course we need a balanced budget amendment. You can’t...
Scroll to top