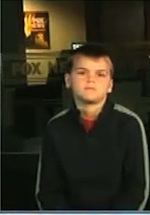 It is an awesome story. Awesome because there is little explanation for this other than a: it’s true, b: it’s a set up. But the evidence would seem to show it’s legit. A young boy, under anesthesia during an operation sees his baby sister, who had miscarried before she was born. Amazing.

This is via the Right Scoop. Watch and listen and be amazed. Awesome. I will update with my comments later.

UPDATE: here’s what the Right Scoop has to say about it’s believability on this:

Apparently during the same surgery Colton went to Heaven where he recounts how he met his grandfather who he had never known, who he later recognized in photos. The interesting thing is that he didn’t recognize photos of his grandfather as an old man with glasses, which is how everyone knew him, but rather as a young man. Colton’s father literally had go find a photo of ‘Pop’ as a young man before Colton was able to recognize him. Now that’s pretty wild.

But I must say what really surprised me was that Colton’s father recounts how Colton, still 4 years old, told his mother “you had a baby die in your tummy didn’t you”, which completely shocked them both because they had never told him about their miscarriage. They asked him how he knew and he said that he met his sister in Heaven and she told him what happened.

… I’m sure there are some of you who will be naysayers, but to me this is pretty amazing and rather difficult to simply reject out of hand.

Tales from the TSA, Part 414
Scroll to top