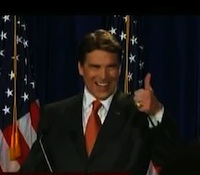 The video about 5 min. long but it’s well worth a watch. He says all the things conservatives long to hear with some notable quotes. But the message is simple. Change begins with us and the message we need to send to Washington said government emanates from us, we are not subjects of the government.

I’ve included the video and also a transcript.

It is time to get America working again. And that’s why, with the support of my family, and an unwavering belief in the goodness of America, I declare to you today as a candidate for President of the United States.

The change we seek will never emanate out of Washington, D.C. It will come from the windswept prairies of Middle America, the farms and factories across this great land, from the hearts and minds of the goodhearted Americans who will accept not a future that is less than our past, patriots – patriots who will not be consigned to a fate of less freedom in exchange for more government.

We do not have to accept our current circumstances. We will change them. We are Americans.

That’s what we do.  We roll up our sleeves. We go to work. We fix things.

We stand up and proudly proclaim that Washington is not our caretaker and we reject the state that, in Margaret Thatcher’s words, she said a state that takes too much from us in order to do too much for us.  We will not stand for that any longer.We’re dismayed at the injustice that nearly half of all Americans don’t even pay any income tax.

And you know the liberals out there are saying that we need to pay more. We are indignant about leaders who do not listen and spend money faster than they can print it.

In America, the people are not subjects of government. The government is subject to the people. And it is up to us, to this present generation of Americans, to take a stand for freedom, to send a message to Washington that we’re taking our future back from the grips of central planners who would control our healthcare, who would spend our treasure, who downgrade our future and micro-manage our lives.

It is time to limit and simplify the taxes in this country. We have to quit spending money we don’t have. We need to get our fiscal house in order and restore our good credit. And we will repeal this President’s misguided, one-size-fits-all government healthcare plan immediately

Pawlenty drops out of presidential race after finishing distant third in Io...