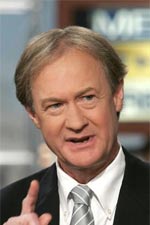 Gov. Lincoln Chaffe’s (I-R.I.) decision to order state executives to stay off talk radio during state time had nothing to do with the wasteful use of state resources. It had everything to do with politics, nothing else. Chafee now states advertisers must shut down talk radio.

Of course, advertisers can do what they like, but the governor’s statements shows they guy has absolutely no clue. If advertisers are buying time on conservative talk radio across the country, they are not doing so to support the format, they are buying spots because their audience will hear the commercials.

Chaffe’s target will soon be the advertisers themselves. We’ve got a sitting governor virtually demanding advertisers stop marketing on [conservative] talk radio. What would you do if you were an advertiser who has booked commercials on talk radio in Rhode Island and may be doing business with the state? What if your business requires permits or licences from the state?

This is a threat to your business. Chaffe’s next step may be to release executive order requiring businesses who do business with the state not advertise on talk radio. You think I’m reaching? Trust me, if you own a HVAC business who advertises on a conservative talk radio show in Rhode Island and are looking to land a contract with the state to install and/or maintain the heating and air conditioning in a few state buildings … you best watch out.

From the Providence Journal this morning, with my emphasis in bold.

“Those that pay — the advertisers — should shut them down,” he said to reporters following an unrelated event Thursday morning in downtown Providence. “My view is that these people don’t even believe what they are saying, but they are making money off it. They’re selling this divisive and highly emotional [content] … because it sells. So the advertisers have to shut them down. That’s my view.”

The law has a term for this kind of thing. It is called ‘tortious interference.’ And, as the lawyers say, it is ‘actionable.’

And speaking of which, it is also probably highly problematic to have a government official calling for censorship. This would at the very least appear to be the ‘prior restraint’ of free speech.