Sacre bleu! TOTUS finally reached the breaking point and joined his cousin TOVPUS and crashed to the floor in the middle of the President’s address on urban policy. Perhaps it was exhaustion. Perhaps it’s revenge.

Perhaps the whole Obama mythology is beginning to unravel. From Jake Tapper:

Midway through his speech on urban and metropolitan policy in the Eisenhower Executive Ofﬁce Building this afternoon, one of his two small glass prompters came crashing down, hitting the wood ﬂoor and crashing in many pieces. It made quite a ruckus.

“Oh, goodness,” a startled President Obama said. “Sorry about that, guys.”
He then proceeded on with his remarks, “To pull our economy back from the brink, including the largest and most sweeping economic recovery plan in our
nation’s history…”

For the rest of the speech the president relied on the one remaining teleprompter, to his right, and notes on his podium to ﬁnish his speech.
Shards of glass remained near the president’s feet for the duration of his speech. 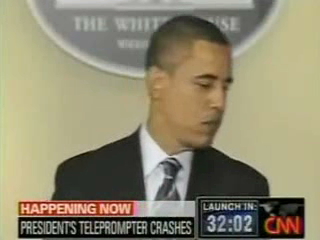 It’s not the first time an Obama administration teleprompter crashed under the pressure.

The death of ERISA

Senators can filter information on their own, presidents can not

Media-types agree: They will support Obama during presidential debates
3 replies

Obama’s Slight Of Hand …. Symptom of the Disease: Federal funding of abortion (5)
Scroll to top