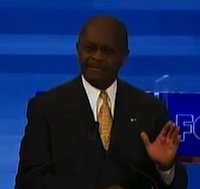 Herman Cain? Well that’s what a Luntz focus group said … but it’s not the first time people have determined he’s the real deal. The former Pillsbury executive and the man who saved Godfather’s Pizza from bankruptcy seems to bringing a plain speaking common sense to the debate and he’s quickly picking up steam.

I just reviewed the debate this morning and I was impressed with his plain spoken performance. Here’s hid answer to the question on how to bring down energy prices. The crowd liked it for sure.

It’s that plain speaking that won over the focus group. H/T to JIm Hoft for this: