Certainly the videographer who asked questions at this “progressive” rally was looking for these exact reactions. And I’m pretty certain the video was even edited, but that’s not what is important here. What’s important is the media’s absolute dishonesty concerning how they report – or don’t report – this kind of stuff. 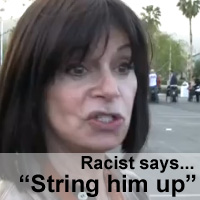 Original hat tip goes to Sister Toldjah, and Big Government has the video. Simple question. If this was a TEA Party event and the man behind the camera asked “what are we going to do after we impeach President Obama” and the answer was “string him up” how would this be reported?

Others writing on this subject include James Taranto at the Wall Street Journal, John Hinderaker at Powerline, and Dan Riehl at Big Journalism.

Justice for Anita Hill? Cut off his toes and feed them one-by-one to him.

I’m all about peace, but I would say torture.

After we impeach Clarence Thomas, what do we do with him? … We string him up.

Attacks on Clarence Thomas? Approved … since he’s a conservative.

You have to ask the question if the woman who suggested Thomas be strung up is hanging her head in shame or if she is sticking with her inflamed rhetoric. I somehow don’t think we’ll see her crying and apologizing profusely to black people on Good Morning America.

I don’t think we’ll see an comments from Jessie Jackson or Al Sharpton either. The NAACP did not react to this specific video or protest, they just put out a standard statement calling for “all Americans to abandon vitriolic language.”

If this was a TEA Party event, you know the statement would have had quite a different tone.

Matthews: Don’t pressure illegal aliens with law enforcement interaction, they might get mad

Obama to Business: Ask not what we can do for you … but what you can do...

Planned Parenthood staff certainly use the word “confidential” a...
Scroll to top