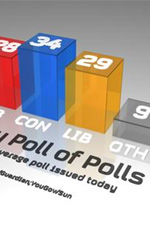 The current AP/Roper poll indicates most of us are “moderates”, but that’s not true. The sample – and how you ask the question – is very important. AP/Roper consistently shows one-third of the population describes themselves as moderate, while the George Washington University Battleground Poll consistently shows almost two-thirds of registered likely voters are somewhat or very conservative.

Only 2 percent describe themselves as moderate in the Battleground Poll. How can the discrepancy be explained?

Update: The Sept. 2010 Politico GWU Battleground Poll (PDF, 81KB)  was released this morning and I missed it. Question D3 reveals 6 percent moderate. Keep reading below for a screen shot of question D3.

In a recent blog post, Rick Green at the Hartford Courant simply copy and pastes one section from page 54 of a 65 page release with current and past poll results in an attempt to prove a point. The question (G11a) simply asks, generally speaking, do you consider yourself a liberal, moderate, or conservative? If – and only if – you answered liberal or conservative, the poll taker is directed to dig deeper and determine if you are somewhat or strongly liberal or conservative.

The AP/Roper poll throws a wide net, asking 1,000 adults the question. It did not matter if those asked are registered voters or even likely to vote.

The April 2010 Battleground Poll – of which I’ve referred to in multiple blog posts – asks their question a bit differently and queries 1,000 registered, likely voters.

If you only give respondents three options – conservative, liberal or moderate – I’m certain a good percentage would choose moderate to distance themselves from what is described by the media as the “far” right and left. They choose the safe “moderate” option.

Battleground takes a much better approach, immediately providing respondents with six options – very conservative, somewhat conservative, moderate, somewhat liberal, very liberal or unsure – and on top of that, the question is specific to politics and government. They clearly provide the same opportunity to chose “moderate.”

For the Battleground Poll question – when thinking about politics and government, do you consider yourself to be… – results have been consistent as well, showing a combined six in 10 registered, likely voters consider themselves either somewhat or very conservative. Very few – 2 percent in the April poll – chose “moderate” in the Battleground Poll. Most people are not “in the middle.”

Rep. Holmes Norton: I’m surprised you have not donated to me yet –...
Scroll to top