Two former guests at Camp Delta – it is now confirmed – are back in the fight after progressing through an otherwise successful Saudi rehabilitation program for jihadists after their release from Guantanamo. 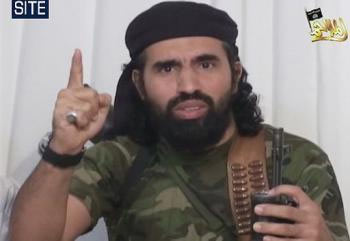 This is not surprising since there is a get-arrested-and-return-to-prision rate of more than 50 percent here in the United States, so one in ten – that we know about – is really not a failure; you had to figure some of them would go back to the jihad.

But these two seem pretty comfortable in their official Al Qaeda’s Yemeni outfits, since they got on video and basically said hah hah. … (Think of Nelson from The Simpsons.) From the New York Times…

Two former Guantánamo Bay detainees now appear to have joined Al Qaeda’s Yemeni branch, which released a video on Friday showing them both and identifying them by their names and Guantánamo detainee numbers.

American counterterrorism officials have already confirmed that Said Ali al-Shihri, 35, who was released from the American prison camp at Guantánamo in November 2007, is now the deputy leader of Al Qaeda’s Yemeni branch. He is suspected of playing a role in a deadly attack on the American Embassy in the Yemeni capital, Sana, in September.

In the video released Friday, Mr. Shihri sits alongside a man identified as Abu Hareth Muhammad al-Awfi, who appears with a script at the bottom of the screen giving his Guantánamo identification number, 333. That number corresponds to a man known in Pentagon documents as Mohamed Atiq Awayd al-Harbi, who was also released to Saudi Arabia in November 2007. …

Both men passed through a Saudi rehabilitation program for jihadists after their release from Guantánamo. That program has been seen as a model, and the Saudi government had previously said that none of its graduates had returned to terrorism.

In the video released Friday, Mr. Awfi warns fellow prisoners about the Saudi program and threatens attacks against Saudi Arabia. He also speaks angrily about the Israeli attacks on Hamas in Gaza.

Mr. Shihri also speaks in the video, saying “by God, our imprisonment only increased our perseverance in the principles for which we went out, did jihad for, and were imprisoned for.”

Malkin has the following…

This is an issue the Right should unite around immediately and in full force. 9/11 families are leading the way. Don’t miss this must-read from Michael Burke, brother of FDNY Capt. William F. Burke Jr., who was killed on Sept. 11, 2001, and follow-up from 9/11 Families for a Safe and Strong America.

In reference to the photo of al-Shahri above, someone should really tell their team the belt holster thing-a-ma-gig holding the bullets looks cool, but would provide a reload time that could only be described as pathetic.

I might be having a little fun since I’m pretty tired, but you can’t say that these guys are not dangerous. What is Yemen doing to shut this group down?

Told you so: Obama will miss Guantanamo deadline Update: Video

Enhanced interrogation techniques and the CIA

KSM terrorist trail may be moved out of New York City