Even though I have two books on the desk that I have yet to finish reading, I’m interested in perusing books about economics. Not advanced economics, but just the basics. I’m still trying to find the time to read Basic Economics – on our book list – but thanks to a tip from the good folks at Hot Air, I’ve found another book to add to the list.

. From the inside flap, courtesy Amazon.com…

Everything you know about the Great Depression and the New Deal is wrong.

We all learned in school that the 1920s were a time of unregulated capitalism that led to the stock market Crash of 1929 and the Great Depression of the 1930s. Herbert Hoover was a laissez-faire ideologue who did nothing to alleviate the crisis–even as citizens starved and were forced to live in “Hoovervilles.” And the interventionist policies and massive spending programs of Franklin D. Roosevelt’s New Deal gradually lifted us out of the Depression, until World War II brought it to a definitive end.

The only trouble with this official narrative–taught in most history textbooks, and proclaimed as gospel by the media–is that every element of it is false. Worse, this unsubstantiated myth is now being used to justify a “new New Deal” in response to today’s economic crisis that could lead to a Greater Depression even deeper and longer than the first. But in The Politically Incorrect Guide to the Great Depression and the New Deal, economist Robert Murphy fact-checks the myths, shows why they’re wrong, and delves deep into history to set the record straight. His “politically incorrect” conclusion? It was government, not free markets, that caused the Great Depression–and the New Deal only made it worse. The real “lessons of the Great Depression” are not what you’ve been taught.

Might Barack Obama be the new FDR? You’ll know, after reading The Politically Incorrect Guide to the Great Depression and the New Deal that if he is, that’s nothing to celebrate.

Here is a screen shot of the first couple of paragraphs. 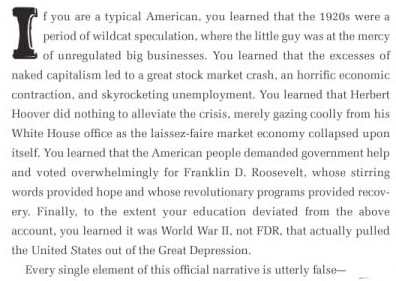 If You Can’t Afford It…

Reason 67: Government should not bail out corporations

Looking back at the Great Depression – tax rates and more

Populism is alive and well – the economy and the Constitution