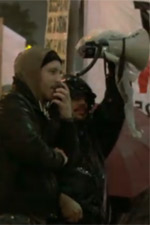 If you have not been watching the high-quality Reason TV videos during the last few months, you’re missing some good Web content. This video gets into the anti-war protests from the past, and the lack of mainstream Democrats protesting now.

Maybe Martin Sheen and his crowd really are out there protesting actively and the mainstream media is just ignoring the protests to keep the Obama administration from being labeled war mongers?

Hat tip to Ed Morrissey at Hot Air who notes…

The neo-Stalinist International ANSWER, one of the groups featured in this film, must have thought they were achieving some sort of mainstream penetration into politics when Democrats started flooding into their rallies. Now they’re back to street-corner protests and “Honk If You <3 Peace” rallies and wondering why it suddenly got so lonely.