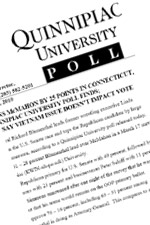 Hold on here a second. Will someone in the media please take a look at the polling methodology between the Quinnipiac and Rasmussen polls concerning the US Senate race in Connecticut? Why are the results so different?

So we’re talking about a six to seven day gap, and the results are that different? The Rassmussen poll was a statistical dead heat with Blumenthal leading a direct race with McMahon 48 to 45 percent.

The Q poll released today has Blumenthal leading the GOP-selected McMahon 56 to 31 percent.

I don’t have the time to get into all of the details, and I don’t have the crosstabs for the Rassmussen poll, but instead of just touting the hey-look-McMahon-is-in-a-freefall story, can someone in the media explain the difference and why/how this happened?

I’m pretty certain nobody in Connecticut media will step up to take a look, so I’m calling Ed Morrissey from Hot Air and will ask him to dig in.

Joe Scarborough:Look what’s happened to CT since the income tax

Another Chapter in the Most Ethical Congress EVAH!

Obama’s “misplaced” words about the oil spill
Scroll to top