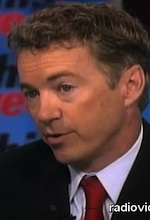 It seems everyone has a response now to the SOTU but I am choosing to highlight Senator Rand Paul’s response because he does not hold back, he makes sense, and he, unlike so many others, understands the gravity of the problem. “The fact is the cat’s out of the bag …”

This comes to us from HotAir. As AP points out, the tragedy in the SOTU is that the President had an opportunity to explain just how serious the fiscal problem is in this country. In a sense, the government has now taken the place of the financial system in terms of crisis mode. And like the mortgage crisis that most everyone ignored for years, politicians are pretty much doing the same thing with the government’s money problems, only this time, there’s no one willing to rescue the government.

Go read AP’s post because he links to a number of great commentaries from yesterday, and wonders how it’s possible the public still doesn’t see much difference between Republicans and Democrats on this issue. He also highlights this from Matt Welch at Reason.

Here’s a reality check: We will not have high-speed rail within Segwaying distance of 80 percent of the country, ever. We will not get 80 percent of our electricity from “clean energy sources” by 2035, unless someone far outside the halls of government invents a snail that eats trash and poops hydrogen. Obama won’t veto every bill that arrives on his desk with earmarks–re-watch that part of the speech last night; no one believed him.

Why won’t these things happen? Because, as Rep. Paul Ryan rightly emphasized last night, the only real policy issue in America right now is that we are on the verge of fiscal catastrophe because cannot afford the government we’re paying for today, let alone the one we’re promising for tomorrow.

Tough love, as always from the libertarian wing of the party.

Help us “Find The Cure” for Lupus
Scroll to top