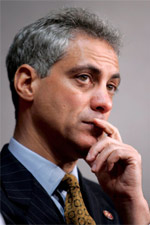 An appeals court in Illinois has just ruled that Rahm Emanuel, President Obama’s former Chief of Staff, is ineligible to run for Mayor of Chicago because he has not meet the city’s residency requirements.  You may recall that a Cook County judge had ruled earlier that he did meet the requirements, and, thus, was eligible to run.

I’ll update this later as soon as I can get more specifics of the court’s ruling, but, thought you might be interested in the latest news on what is bound to be a continuing saga.

Should you care to do so, you can read the entire 42 page decision of the Illinois court here.  But, “distilled to its basics” (as we lawyers would say), the court held that the Chicago ordinance that requires a candidate to “reside in” the city for one year before being eligible to run means that the candidate must “live in” the city for that period of time.  An intention to return and leaving some belongings there doesn’t do it.  Resorting to some 200 years of history, the court felt that a candidate cannot “know the wants and demands of his constituency”, unless he or she is actually present in the community for the required period of time.

Chicago school violence – where are the community organizers?

So, what does Obama think of Chicago’s school voucher proposal?
8 replies

The disgrace of human shields and the progressive agenda