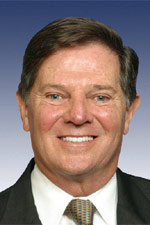 This is great. Concerning the Justice Department’s decision not to bring charges against former House Majority Leader Tom Delay (R-Texas), a New York Times editorial notes “many of Mr. DeLay’s actions remain legal only because lawmakers have chosen not to criminalize them”. No kidding!

Don’t like the kind of trips these congress-critters go on and the salaries they pay family members? There is a solution … these are just symptoms of the disease. Take the money and power from Congress and give it back to the states. The US Constitution is clear, and by incrementally moving power from local and state governments to the federal government, we have bred this type of legal corruption.

Sure, we may continue to have corruption at the state and local level in some places, but the corruption would be less far removed from the people and the shame involved might just reduce the corruption level to something manageable.

At the federal level – when you’re tossing around billion-dollar figures every weekend – all sorts of crap can be passed off as normal … when it’s not.

Agree with me? It’s a core conservative principal … welcome to the club and bring your friends, family and neighbors.

From the New York Times with a hat tip to Jonathan Alder at Volokh Conspiracy.

Mr. DeLay, the Texas Republican who had been the House majority leader, crowed that he had been “found innocent.” But many of Mr. DeLay’s actions remain legal only because lawmakers have chosen not to criminalize them. Mr. DeLay’s wife and daughter, for example, were paid more than $500,000 by his political action and campaign committees for “strategic guidance” and event-planning. Others in Congress, including House Speaker Nancy Pelosi, have put family members on the payroll.

The Justice Department spent six years investigating Mr. DeLay’s relationship to Jack Abramoff, the über-lobbyist who served three years in prison for fraud, corruption and conspiracy. Just to recall: Mr. DeLay, his wife and several staff members took a lavish 10-day golf trip to England and Scotland in 2000. The trip was arranged by Mr. Abramoff and paid for by gambling-industry clients, including the Choctaw Indian tribe. Two months later, Mr. DeLay helped kill a bill to ban Internet gambling — a proposal that the tribe and Mr. Abramoff’s other client feared would hurt their business.

There were several other trips arranged by Mr. Abramoff and conveniently followed by legislative favors. In 1997, Mr. DeLay and his wife visited the South Pacific island of Saipan. The trip was paid for by the island’s government and garment manufacturers, clients of Mr. Abramoff. Mr. DeLay later helped block a bill that would have required the garment manufacturers to pay workers the minimum wage.

A thought for the day

Obama is the best thing to ever happen to … libertarianism?
Scroll to top