This is toooo much and a sign that the overbearing nanny state doesn’t just push the idea that the Tea Party is a bunch of mobsters … they actually believe it.

A tea party crowd of about 200 gathered in Quincy before President Obama’s staged campaign style rally, small but emphatic in it’s message. They wanted the President to know they did not like his overbearing, overspending style of government. When they were asked to step back from the curb, the Quincy Mayor called in the riot police. Take a look at who the Quincy police were afraid of.

From Jim Hoft pictures and video: 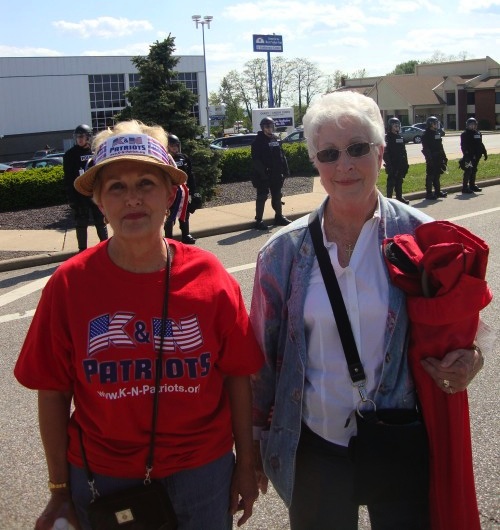 Here’s what the Quincy paper had to say about the swat team swarm. Heh! (Bold is my emphasis)

“We’ve always been respectful and acted with dignity,” McQueen said. “We are out to make our case and make it peacefully.”

There were a few tense moments when the crowd moved west down York toward Third Street after the president’s motorcade arrived. A Secret Service agent asked the crowd to move back across the street to the north side.

When the crowd didn’t move and began singing “God Bless, America” and the national anthem, Quincy Deputy Police Chief Ron Dreyer called for members of the Mobile Field Force to walk up the street.

The officers, mainly from Metro East departments near St. Louis and dressed in full body armor, marched from the east and stood on the south side of York facing the protesters.

There was no physical contact, and the officers did not come close to the crowd, but there were catcalls and more than a few upset tea party members, including a woman who shouted, “This is communism!”

There are more pics at Jim’s site … but here’s the video.

Reminds of the caller yesterday who said Connecticut State Representative Chris Wright from Bristol called the Tea Party people members of the KKK.

Tax dollars at work? – NPR “learns you to speak teabag”

Just a heads up on the new “villain”
5 replies

How Do You Say “Oops” in Spanish?Obamacare’s first step
Scroll to top