I’ve been thinking about attending CPAC in Washington, D.C. for the past few years. Jim and I have discussed going down for the three days and even broadcasting his show from the venue. I figure it would be pretty cool to meet some like-minded bloggers and share an adult beverage or meal with friends. Maybe CPAC 2012 will be the year?

Although I’m certain there were some very good panels and speeches, there were two individuals who seem to have stood out this year. First, we have the video from Rep. Allen West (R-Fla.) who closed the CPAC 2011 conference. Sorry about the stretched screen, but I wanted to get this posted up prior to tonight’s e-mail. West’s speech starts at about 8:20 in.

The second video is from Indiana Gov. Mitch Daniels. His speech starts about 8 minutes into the video. Click on the image and you’ll be routed to a good-quality video over at CSPAN. 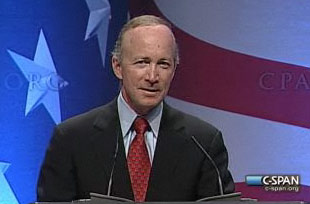 What did you think about these speeches? Both of these men do qualify for president of the United States in my book. I’m not saying they could or will win, but they are qualifed.

UPDATE: Here’ one that Ed Morrissey says if you watch one speech from CPAC, this is the one.

Whether one thinks that Cain has a chance of making inroads for the nomination or not, there is no doubt at all of Cain’s value to the conservative movement. In this speech, Cain delivers a stirring stemwinder, reminding people to “stay informed, stay involved” — and ruffled some feathers by telling CPAC that “stupid people are ruining America”:

If you are not familiar with Cain, he is the former CEO of Godfather’s Pizza and radio talk host. But even here, there’s drummed up phony lefty controversy. The speech got a bad review from a “25 year old white boy” at the Politico:

Cain didn’t live up to that reputation at CPAC. He had one or two memorable lines, such as: “Stupid people are ruining America.” But one or two middling zingers do not a credible candidate make.
Given his flat performance, Cain’s going to have to work extra-hard going forward to win a place in the 2012 process.

Writes Stacy McCain at his blog:

My first thought: Who anointed Alexander Burns as the Decider?

Why does a liberal columnist for a liberal newspaper get to decide who are the winners and losers at a conservative conference? A little research revealed that Alexander Burns is a graduate of Harvard University, so there’s your answer. Upon receiving his disploma, every Harvard graduate acquires the right to tell the rest of us what to think.

Ahhh, Harvard. That explains it.

Game on! Bush torture memo prosecutions NOT off the table UPDATE: Thompson Speaks

Oprah’s comments on racism – It got worse