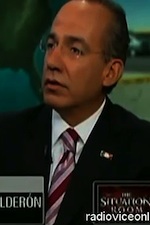 The good news Mexican President Calderon doesn’t hide his hypocrisy. The bad news he doesn’t care. That should be enough to infuriate even the fence sitting Americans when it comes to Arizona’s illegal immigration bill. You know the one that prohibits profiling by race. The one that prohibits cops from asking about immigration status in the course of a criminal investigation. The one that … oh why bother. I suspect neither President has read the bill.

Now the juicy juice video. Mexican President Felipe Calderon spoke with Wolf Blitzer yesterday and repeated the same lecturing line of crap that the Arizona bill will lead to “racial profiling” and is discriminatory. Wolf fires back with a little compare and contrast with Mexico’s immigration policies making the Mexican President look a little silly.

Red meat for all the pro Arizona folks in the audience.

That took cashews. But my guess is he doesn’t care. The One has his back. Remember November 2010!

UPDATE: AP at Hot Air has highlighted something far more indicting than the similarities between Mexico and Arizona’s laws. Mexico’s human rights records with migrants.

Not sure if that means at the border only or while you’re inside the country. Regardless, Mexico’s best deterrent against illegals isn’t its statutes but the fact that abuse of immigrants is so vicious and endemic that Amnesty International called it a “human rights crisis” just last month. Bear this in mind the next time you see some leftist idiot applauding Calderon’s fine principled stand on the dignity of all individuals:

He goes on the quote from amnesty.org and it’s pretty revealing and alarming. Michelle Malkin has a take on this as well, detailing immigration laws in Mexico. And this bum had the nerve to lecture us, and the One didn’t even stand up for us? Nice. Remember November 2010!