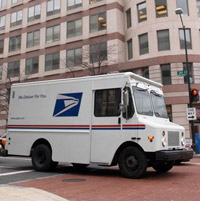 Not kidding. Postal Service drivers get moving violations while delivering mail. They get caught by the City of East Cleveland’s traffic cameras and were issued multiple citations for speeding or running through red lights. The attorney for the Post Office says “screw that, we’re not paying.”

The lawyer is claiming Executive Branch immunity. In other words, since the president’s motorcade does not have to obey local and state traffic regulations, neither does a post office employee. (That’s a goofy read, but I like it.) To be more precise, cities are welcome to issue traffic citations to the post office, but they are just going to ignore them and they certainly don’t have to pay the fines.

You can read more about the story here. George Hittner – the attorney who works for ATS, the contractor hired by the city – responded…

We suggest that you transfer the liability for the infractions to the USPS drivers who incurred them, and instruct them that pursuant to Ohio law, as well as the USPS guidelines, the infractions are their responsibility. If you choose to ignore the infractions, penalties and fines will continue to accumulate.

My guess is this is where the federal union for the post office employees will step in. Certainly providing the names of the drivers who committed the infractions will violate some sort of union rule. Wondering if they were punished internally by the USPS? Me too.

Hagel will be confirmed as Secretary of Defense
Scroll to top