The federal government closed a portion of a US park in Arizona four years ago due to violence perpetuated by illegal aliens and smugglers along the US/Mexico border. Maybe the president will be up to the task of “kicking some a$$” to get the United States border secured?

Update: Keep reading below, and thanks to AP at Hot Air for the linkage … have we given up another 80 miles? This is looking pretty bad. In October of 2006, the U.S. Fish & Wildlife Service closed a 3,500 acre portion of the Buenos Aires National Wildlife Refuge.  Has the United States government just given up this land to illegal aliens, smugglers, drug traffickers and other miscreants? 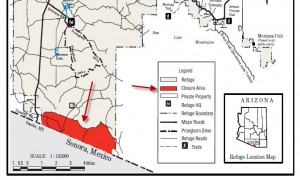 The sheriff in the area is begging the federal government to step up and provide some assistance. His one office is responsible for an area the size of Connecticut.

Why have we not heard more about this? Sure it’s only 3,500 acres and it’s in the middle of nowhere Arizona, but this is United States territory! If we took the extreme step to close the area to Americans four years ago, don’t you think some resources would be immediately sent out to deal with the issue?

The Buenos Aires National Wildlife Refuge has been adversely affected by border-related activities. The international border with Mexico has also become increasingly violent. Assaults on law enforcement officers and violence against migrants have escalated. Violence on the Refuge associated with smugglers and border bandits has been well documented. Many of these activities are concentrated at, or near, the border. The concentration of illegal activity, surveillance and law enforcement interdictions make these zones dangerous.

Closure is in effect until further notice.

More recently, Fox News had an interview with a sheriff of the Arizona county under siege. If you live in the area and can send us pictures of the signs in the area warning you of danger, please send them to us.

Update: It’s important to note that after the video interview below (which I think was yesterday), Fox News has a written article online now – on the home page – about this story. The problem is Fox News and others miss the point the closing of this area was done almost four years ago. Something I noted in paragraph one of my post.

If they closed the area to public use in October 2006, I’m not sure what this means…

Pinal County Sheriff Paul Babeu told Fox News that violence against law enforcement officers and U.S. citizens has increased in the past four months, forcing officers on an 80 mile stretch of Arizona land north of the Mexico border off-limits to Americans.

They note an 80 mile stretch of Arizona land, but the Oct. 2006 document mentions 3,500 acres and the PDF linked above seems only to block off a what seems to be a 10 square mile area along the border. Did we give up 10 square miles back in 2006, and now we’re giving up another 70 square miles in the area?

Can someone in the media or in the area please clearly define exactly what area the federal government suggests Americans avoid?

The violence is so severe that the federal government has posted strongly-worded signs at national parks near the border warning visitors of the risks. Many of the public lands are not located directly on the southern border but are used as pathways for traffickers—transporting drugs and illegal immigrants—en route to major metropolitan cities.

Most of the problem areas are located in southern Arizona and are annually visited by thousands of unsuspecting people. In an effort to protect the public, the U.S. Bureau of Land Management has posted warnings at various parks, including the Sonoran Desert National Monument, Cabeza Prieta National Wildlife Refuge, Organ Pipe Cactus National Monument and Coronado National Forest.

The situation has become so dire that authorities recently put up stronger warnings at several of the parks, according to a national news report. Nearly a dozen new signs have been erected at various locations in an effort to give the public a heads up on the increasingly dangerous situation. The new signs warn visitors about smuggling vehicles speeding, instruct them to walk away if they see something suspicious and avoid abandoned vehicles and backpacks because they may contain drugs stashed by smugglers.

The problem is especially critical at the Sonoran Desert National Monument, located about 80 miles south of Phoenix. The most biologically diverse of the North American deserts, the park spans nearly 500,000 acres and houses three congressionally designated wilderness areas as well as significant archeological and historic sites. It’s popular among families but also a favorite pathway for Mexican smugglers making their way into Phoenix.

Update 3: Matt Drudge does not link to my post, but he does link to a KFYI story that provides a link to the same PDF I did, but never mentions the document concerning the closure of the 3,500 acres was from four years ago. Come on now!

John McCain and the Open Border

Fair and Balanced: Krauthammer and O’Reilly on the Obama speech-“kicking...

NJ Governor Chris Christie: “The day of reckoning is here.”
Scroll to top