Here is the interview we did with Kris Kobach, law professor at the University of Missouri, Kansas City on Arizona’s illegal immigration bill signed into law this week by the Governor. It’s the entire half hour, so enjoy.

One more word about Professor Kobach. He was also John Ashcroft’s chief advisor on immigration. His credentials are stellar and well worth the listen, as well as the read. Here’s a portion of the Professor’s op-ed in the NY Times yesterday. This is the section on reasonable suspicion which is what caused the mainstream media to go all crazy on the bill. 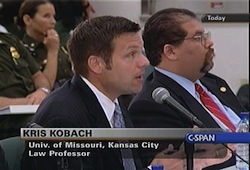 “Reasonable suspicion” is a meaningless term that will permit police misconduct: Over the past four decades, federal courts have issued hundreds of opinions defining those two words. The Arizona law didn’t invent the concept: Precedents list the factors that can contribute to reasonable suspicion; when several are combined, the “totality of circumstances” that results may create reasonable suspicion that a crime has been committed.

For example, the Arizona law is most likely to come into play after a traffic stop. A police officer pulls a minivan over for speeding. A dozen passengers are crammed in. None has identification. The highway is a known alien-smuggling corridor. The driver is acting evasively. Those factors combine to create reasonable suspicion that the occupants are not in the country legally.

Ironically, as the Professor says in the podcast, this section was further defined this week to allay fears and to stop the attacks from the left. Although he quickly added it did not need to be, a point made as well by Steve McGough here. As one would expect it did not stop the hollering from the left.

One change to the bill strengthens restrictions against using race or ethnicity as the basis for questioning and inserts those same restrictions in other parts of the law.

Changes to the bill language will actually remove the word “solely” from the sentence, “The attorney general or county attorney shall not investigate complaints that are based solely on race, color or national origin.”

Another change replaces the phrase “lawful contact” with “lawful stop, detention or arrest” to apparently clarify that officers don’t need to question a victim or witness about their legal status.

A third change specifies that police contact over violations for local civil ordinances can trigger questioning on immigration status.

UPDATE: Steve was right to point out it is an “illegal” immigration bill and I have changed the wording in this post to reflect that fact. My bad. Furthermore, if both Steve and Kris Kobach agree that the law did not need to be changed, is quieting the hysteria enough to justify the changes? Kobach believes yes head the ACLU off at the pass. This is ripe for comments all weekend. Give us your thoughts. below and I will post a poll.

“Lawful Contact” did not need to be redefined in Arizona illegal... Economics 101: Why repeal the capital gains tax
Scroll to top