Double the normal volume. The trend has slowed, but if the state legislature or the federal government starts pushing more gun control legislation, you’ll see another spike. I tell you, the people I have taught the NRA Basic Pistol course are not – in general – taking the class because they are worried about violent crime, they are taking the class and getting permits now since they think they may lose the right in the future.

From The Hartford Courant, with my emphasis.

Statewide, the number of new pistol permits issued by state police increased steeply beginning in March of 2013, reflecting a lag time after applications are submitted to local authorities. From March to September 2013, state police issued 18,233 new permits – a 78 percent increase over the same period in 2012.

Let’s tell it like it is. The over-reaction by the State of Connecticut introduced a lot of people to handguns through the NRA Basic Pistol class. And trust me, they like it. Many of those people had only a passing interest interest in guns, until they realized it was a right that might be taken away by the government. And a lot of those good folks happen to be … female. Granted, I don’t teach too frequently, but one-in-four of my students were ladies this year. 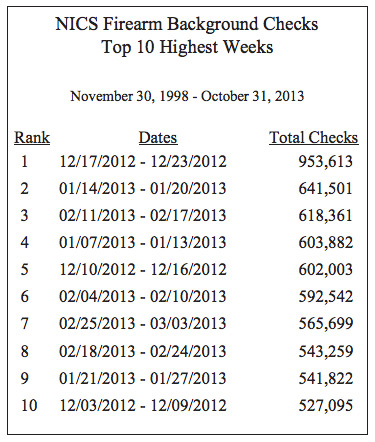 The second thing to point out is the increase in gun sales. By the end of the summer, the sales trend had slowed, but there were huge spikes in sales between January and July of this year. The graphic is a listing of the top weeks for NICS federal background checks since November of 1998. That’s 15 years of data.

Every single week between the Sandy Hook shooting and the beginning of March 2013 was in the top 10. I bet a lot of the top 20 weeks also include 2013 dates.

Although there is not a one-to-one correlation between NICS checks and a sale, it certainly is valid information when you’re reviewing volume. Keep in mind many private sales are not required to go through a NICS check.

I’ve heard the gun-control advocates say over-and-over again that more guns eventually results in more crime. We’ve proven that TOTALLY FALSE, but they keep saying it. I’m wondering how they feel now that they can see they put MORE firearms out there because of their legislation?

How many Obamacare enrollees – so far – are young and healthy?