I alluded to this at the very end of the show, so perhaps I should post on this. There was one point during the “angry” Obama announcement from last night, Obama was forced to admit that fiscal conservatives were indeed right. Raising taxes costs jobs, not just people’s income. But that’s not all.

Yes, he was pretty angry, or as Jonah Goldberg put it, “Like he was forced to eat spinach”. Part of the reason is he had to abandon his long held belief that redistribution of other people’s money creates jobs and grows an economy. We, meaning you and me, told him it would never work … as this chart from Business Insider shows (H/T: HotAir). Notice that of all the major recessions … Obama’s has been deeper and longer than any of the others including the worst in my lifetime (during the Reagan years) and, dare I say it, the downturn during the Bush early years. Both were shorter, and recovery was quicker. But the difference is both of those recessions ended with a cut in income tax rates. 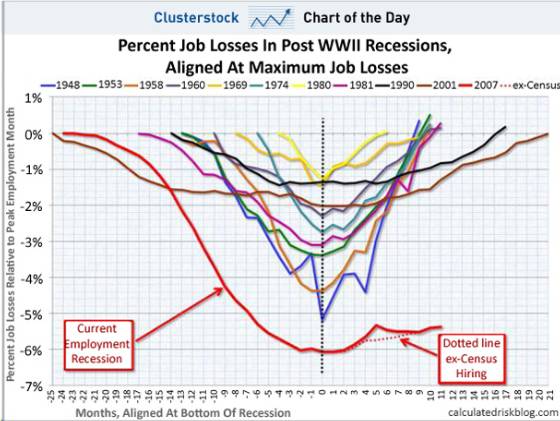 Now here’s the Obama video from last night. It’s a small victory, but one nonetheless.

Let me make one other point. This is not a stimulus. As for the rest of the compromise by problems with it are by now well detailed. The rates were not cut … they are being maintained. Hardly a stimulus. And cutting the payroll tax by 30% (not 2%) for employees is still small and by not giving the same break to employers, it is not likely going to stimulate hiring, but I could be wrong.

In addition, as I pointed out here … extending unemployment benefits 13 months is not good for anyone. Yes we got the tax rates extended but at what cost … as CK pointed out last night.

Finally, I will never be able to get my mind around an estate tax, negotiated by the Republicans. Overall, government continues to grow, and I see any victory as a small one. Hopefully I will be proved wrong.

Exit Question: Did anyone listen to Rush today? Can you tell me where he came down on this. I understand the radio game he played about making folks stay through the show, a smart move, may I say. But couldn’t stick around for the answer.

If Obamacare is so good…

Back door welfare or stimulus?
Scroll to top