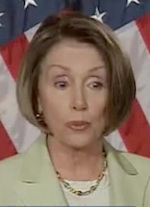 Let me remind everyone, the GOP never brought this subject up, it was the Obama/Democrat health care legislation that put the mandates out there and brought the issue to the forefront. Now Rep. Nancy Pelosi (D-Calif.) is making crap up out of thin air.

And yet, she sounds so calm and reasonable when she speaks of the subject. This is a woman who does not deserve your respect.

“Ninety-eight percent of women in childbearing age that are Catholic use contraception. So, in practice the church has not enforced this and now they want the federal government and private insurance to enforce it. It just isn’t consistent to me,” Pelosi said.

The statement came after Pelosi was questioned about the conflict between the Catholic Church and the Obama administration over a regulation, set to take effect on Aug. 1, that will require all health-care plans in the United States to cover sterilizations, artificial contraceptives and abortifacients, and thus would force Catholic institutions and individuals, in complying with the Obmacare mandate to buy health insurance, to act against their consciences and the teachings of their faith.

She’s outright delusional. She’s suggesting the Catholic Church should be enforcing their contraception “doctrine.” Should the Catholic Church have a military wing like the Taliban or Saudi Religious Police to enforce doctrine? The church has their pre-marital Pre-Cana classes, teaches doctrine in Catholic schools and through Bible studies. That said, should they also be out their enforcing the 10 Commandments?

She sits in this chair speaking all high-and-mighty about how family planning is a personal decision, yet she is the one forcing people to pay for contraception for others. All Catholics want is to be left alone and not have to pay for other people’s “sterilizations, artificial contraceptives and abortifacients.”

Exit Question: What would Pelosi say or do if the Catholic Church actually started to physically and literally enforce church doctrine?

View the video clip over at CNS News. (It will not embed here properly and starts automatically.)