UPDATE: You can hear Speaker Pelosi’s comments for yourself below … but Congressman Peter Hoekstra says either the Speaker was asleep or she just wasn’t paying attention because the intelligence briefing laid it all out. Asleep or not paying attention, either way, with Nancy in charge … we are doomed.

Fox News is reporting that  select Democrat Members of Congress were briefed on the enhanced interrogation techniques used by intelligence officers 30 times. Gateway has the story.

The first such briefing dealt with the interrogation of Abu Zubaydah, the Al Qaeda operations chief who ran the training camps in Afghanistan where the Sept. 11 hijackers were trained. Sources said California Rep. Nancy Pelosi, now the speaker of the House, attended the meeting with then-Rep. Porter Goss, R-Fla. (who later became CIA director), and she did not raise any objections.

A few hours ago Nancy Pelosi denied to knew anything … someone is lying. Period. This is the only video I have right now but I will switch it when better stuff comes in.

You really have to listen closely. The meeting she is talking about is with Porter Goss, who went on to run the CIA. Clearly by her admission here, she was told about enhanced interrogation techniques. But she now says she never thought they would use it. Laughable. The CIA tells you about an interrogation technique in the aftermath of 9/11, you don’t object but you don’t expect they will use the technique either. I was born in the morning but not yesterday morning.

Pelosi was the first to be briefed. They told her what they intended to do. She did not object. Case closed.

Pelosi displays she is not a leader 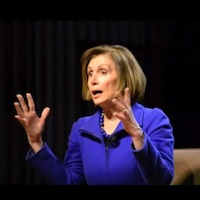 Nancy Pelosi: Hey, what say we spread the wealth around a bit – Video