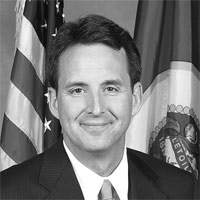 Former Gov. Tim Pawlenty (R-Minn.) just announced on ABC News This Week that he’s out of the GOP race for president. With Rep. Michele Bachmann (R-Minn.) and Rep. Ron Paul (R-Texas) coming in first and third, what does this tell us?

Edited to add… Bachmann is now on This Week with guest host Jake Tapper. Note to her … although she’s downplaying experience governors have and how important it is to lead and manage in the Executive Branch, I think it’s pretty damn important. I wrote about executive leadership in Oct. 2008.

McCain does have leadership experience; four years at Annapolis, seven years as a pilot before being shot down, and he served as the executive and commanding officer of a training squadron in Florida for a couple of years. One thing is for certain, the armed services of our country do a very good job training leaders.

I was certain that Obama would not select Biden for this reason alone. Neither have managed a business, an office, a city government or a state government.

Presidents normally have had executive and/or military leadership positions prior to taking office.

Bush (43), Clinton, Reagan, Carter and FDR all came from the ranks governors. Bush (41), Ford, Nixon, Johnson and Truman were vice presidents prior to taking the oath. Kennedy was a senator prior to taking office, but had four years of military service during World War II. Eisenhower had extensive military experience beginning when he enrolled at West Point in 1911.  Even Hoover had eight years of experience as the US Secretary of Commerce under Harding.

That’s almost 80 years of presidential history. Obama does not have experience to match previous presidents.

Others writing … Jazz Shaw with some analysis at Hot Air.

Rick Perry: the announcement “We are not subjects of the government&#...
Scroll to top