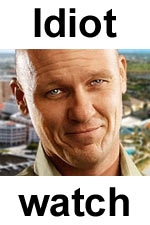 He is. For him to write the following crap, and for the Palm Beach Post to allow the publication of such crap is totally insane. Really, the guy should be referred to a mental health professional.

From the Palm Beach Post with a hat tip to Malkin, with my emphasis in bold.

The name of Michael Lemole, the University of Arizona neurosurgeon who’s been treating U.S. Rep. Gabrielle Giffords’ brain injuries since the Jan. 8 shooting, may sound familiar to Palm Beachers.

That’s because Lemole’s mom and pop, heart surgeon Gerald Lemole and his wife, Emily, live in a $7.1 million house on The Island. They also own a more modest $3.5 million house, also in Palm Beach.

And while Michael is saving the life of the moderate Democratic congresswoman, Gerald and Emily are more into the far, far Right — including Tea Party goofball Christine O’Donnell!

According to campaign filings, Lemole’s parents have showered with thousands in contributions — $15,700 in 2010 alone — Tea Party candidates vying for national offices.

Ironically: Among their favorites are some of the very people whose controversial rhetoric and campaigns are said to provide a fertile ground for the likes of Jared Loughner, who allegedly injured Giffords and killed six others in Tucson.

He must have missed President Obama’s speech in Tuscon last week.