I think this is pretty significant even though it is a survey and not actually raw data from retail outlets. Gallup monitors trends in consumer confidence and spending on a weekly basis. Although consumer confidence has been trending up since mid-November, the year-to-year percent change in consumer spending is down 25 percent and 21 percent for the last two weeks.

Hat tip to Ed over at Hot Air, who points us to the Gallup page with this summary concerning consumer confidence, with my emphasis added. 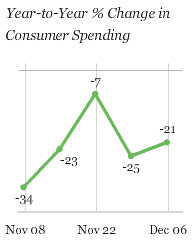 Consumer Spending continued to disappoint last week, as self-reported daily spending in stores, restaurants, gas stations, and online averaged $75 — up $6 from the previous week. Given that last week included a pay period, this increase in spending was minimal at best. More importantly, it was down 21% from last year’s comparable, when average spending was $95 per day. Still, the average spending for the week was at one of its highest levels of the year and it is not entirely clear how the 2008-2009 spending decrease will affect Christmas gift expenditures versus other discretionary spending such as eating out, traveling, or going to the movies. Regardless, it appears as though there will need to be a major surge in consumer discretionary spending during the next couple of weeks if this year’s holiday expenditures are going to come anywhere close to matching last year’s dismal performance.

Ed notes the unemployment figures are part of the reduction of spending, but it certainly can not explain a 21 to 25 percent decline.

Clearly, the rest of the country wants to save money in case times get worse in 2010, which it appears may be the case for retailers, at least.  The credit crunch will limit how much people can charge rather than buy in cash — or how much they’re willing to do so.  Those may be healthy trends on an individual basis for consumers, but not for the economy in the short run.

US production of crude oil, imports and exports – Actual Data

Another WPA: Matthews suggests we work on … railroads