This may be O’Reilly’s most frustrating moment since … ummm … Barney Frank.

O’Reilly is tryig to pin down Rep. Anthony Weiner (D-N.Y.) on who will enforce the Health Care penalty for people who choose not to buy insurance and refuse to pay the penalty. A reasonable question … that O’Reilly asks five times. But Weiner never gives an answer. The ultimate answer of course is the IRS but Weiner won’t budge.

This little comedy routine actually runs six minutes. I could only cut three minutes at the end, and frankly, it’s all you could take too.

These lefities so think we are stupid, or is it just O’Reilly they think is stupid. My guess, they think O’Reilly will let them spew their crap in the interest of bipartisanship. Silly lefty.

Update (Steve): Thanks to Ed Morrissey at Hot Air for the linkage.

Credit where credit is due: Insurance premiums up thanks to ObamaCare 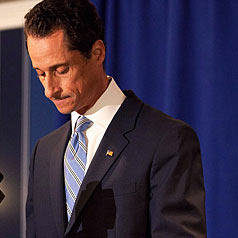 HealthCare.gov could only handle 1,100 users concurrently

Reminder: Obama lied about being able to keep health insurance coverage you like
2 replies