In 2009, President Bush’s proposed budget was $3.1 trillion. For 2010, President Obama’s budget proposed a 12.7 percent increase in the federal budget to $3.55 trillion, but that was not enough. For 2011, he doubled down, proposing a 7.5 percent increase. This year, Obama is taking the debt and deficit more seriously.

For 2012, Obama is suggesting we tighten our belt and cut about 3.5 percent from the federal budget, and spend only $3.7 trillion dollars. Of course, we’ll need to borrow about one-third of that total from somewhere. Here’s a link to the president’s budget via the White House Office of Management and Budget. Have fun. 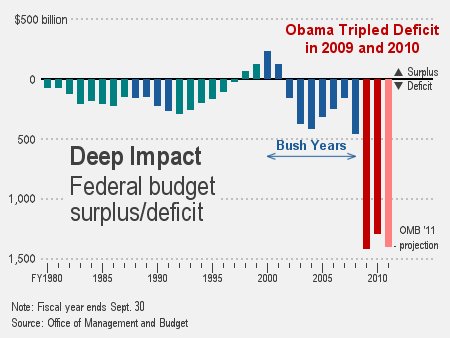 You’re going to hear and read about the proposed budget saving more than $1 trillion over the next 10 years, which – of course – is highlighted in the first sentence of the AP story this morning.

President Barack Obama is sending Congress a $3.73 trillion spending blueprint that pledges $1.1 trillion in deficit savings over the next decade through spending cuts and tax increases. …

Senior administration officials, who spoke on condition of anonymity in advance of the formal release of the budget, said that Obama would achieve two-thirds of his projected $1.1 trillion in deficit savings through spending cuts including a five-year freeze on many domestic programs

Lancey Howard at Free Republic did the math, and figured out the senior administration officials meant to say there was $367 billion in tax increases in the budget since one-third of $1.1 trillion was $367 billion. It’s a nice selling point for Republicans, but my guess is the Obama administration is betting the economy will rebound resulting in additional tax revenue during the next decade. (Edited to add … of course, he’s still planning to tax the rich, they have enough.)

For those of you who have ever run a Baskin Robbins, it’s kind of like betting on sunny days and warm temperatures for the next two years straight … in upstate Michigan.

Discuss among yourselves … it’s an open thread on the president’s proposed budget.

Gateway Pundit writing this morning. Steve Gilbert at Sweetness & Light reminds us Obama promised to half the deficit by the end of his first term.

Update: Michelle Malkin notes the left is freaking out about the budget cuts in Obama’s budget. There will be lots of ‘pain’. Pain? Are you kidding me? The suggested 2012 budget is still a 4 percent increase over the 2010 Obama budget.