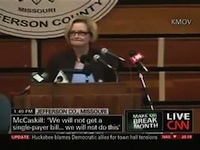 Another liberal tax forgetter… but then why should that surprise you, heh?

Sen. Claire McCaskill (D-Mo) said Monday she will sell her private plane and pay back $287,273 in four years of back taxes, the latest chapter in a politically embarrassing saga for the moderate Democrat facing a tough reelection battle in 2012.

McCaskill’s announcement Monday is the latest twist in a political scandal that has dogged her for the past two weeks. The expensive fiasco clashes with her self-made image as a reformer and good-government advocate during her first term in the Senate. McCaskill has now shelled out more than $375,000 in payments to cover the cost of the plane flights and back taxes, a series of events the senator herself has called “embarrassing.”

On top of this, McCaskill signed on in February as a co-sponsor of Senate legislation that would fire federal employees if they are “seriously delinquent” in paying their own federal taxes.

What with Geithner, Kerry, Rangle and the rest, you’d think that they’d learn to go back and clean up after themselves, especially if they’re going to propose laws and pose as reformers.

Just to tweak your memory a bit … remember the classic Turbo Tax Tim?

File a return … get an IOU

You are the real tax target
8 replies

Failure is an option?