Have you ever gone out and looked for a gift, searching high and low for exactly the right gift for someone, only to receive socks in exchange?

Gordon Brown feels you pain. From the UK Daily Mail:

“He had put clearly great thought into giving the U.S. President lavish gifts to signify Britain’s ‘special relationship’ with the U.S.

During his historic trip to Washington, Gordon Brown gave Barack Obama an ornamental pen holder made from the timbers of the Victorian anti-slave ship HMS Gannet – once called HMS President.

The unique present delighted Mr Obama because oak from the Gannet’s sister ship, HMS Resolute, was carved to make a desk that already takes place in the Oval Office in the White House, after being presented by Britain to the US in 1880.”

“For despite being leader of the world’s most bountiful nation, President Obama handed over nothing more thought-provoking than 25 classic American films on DVD.”

I’m not sure if this is the moral equivalent of underwear and socks from your Aunt Zeituni,but it’s gotta be close.

Caption this… enter your suggestions in the comments section below! 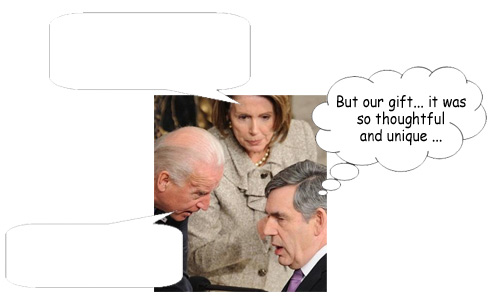 Never Mind About Illegals Learning English – We Must Speak Spanish

Has Obama turned a deaf ear to the generals?