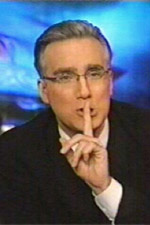 Short and sweet. After contributing the maximum allowed ($2,400) to Jack Conway(D), and to Arizona Reps. Raul Grijalva (D-Ariz.) and Gabrielle Giffords(D-Ariz.), Keith Olbermann – aka Bathtub Boy – has been suspended indefinitely from MSNBC for violating company rules.

Ed Morrissey at Hot Air noted NBC rules concerning political donations absolutely applied to commentators as well as journalists at the network. So we were waiting to see what NBC would do. Phil Griffin, president of MSNBC suspended Olbermann indefinitely without pay this afternoon.

Anyone working for NBC News who takes part in civic or other outside activities may find that these activities jeopardize his or her standing as an impartial journalist because they may create the appearance of a conflict of interest.  Such activities may include participation in or contributions to political campaigns or groups that espouse controversial positions.  You should report any such potential conflicts in advance to, and obtain prior approval of, the President of NBC News or his designee.

Certainly, viewers of Olbermann’s program know exactly where he is coming from, so the donations are not a surprise and quite honestly it does not bother me one bit. MSNBC set the standard for their employees, and by all rights they had to suspend Olbermann or their company policies – all of them, concerning anything – would mean nothing.

To add something more to this post … Yesterday, Stu Bykofsky over at Philly.com wrote a column concerning the “fair and balanced” comparison between Olbermann and Fox News commentator Bill O’Reilly. Bykofsky took the time to review guests on the pundit’s shows and measure what side of the aisle each of them came from. Guests were rated right, neutral or left.

Granted, this is a one week period prior to an election and compares only one show from each network. But during the Oct. 25 – 29 time frame …

“The O’Reilly Factor” welcomed 20 guests from the right, 11 from the left and seven who were neutral. Left and neutral voices combined almost equaled those from the right.

“Countdown with Keith Olbermann” had 20 guests from the left, two neutral and not a single voice from the right. Zero voices of dissent.

So, if you never want to hear anyone challenge liberal views, lock in on Olbermann. While progressives disdain Fox’s claim of being “fair and balanced,” “The O’Reilly Factor” does present opposing views. O’Reilly will cut them off in midsentence, true, but he even does that to people who agree with him. (Shock therapy might help.) Olbermann seems unable to even listen to anything other than progressive orthodoxy.

If the tea party wants a “theocracy for white males,” as he said, Olbermann could be an imam. He offered a paltry four women among his 22 talking heads, 18 percent. (Wasn’t Joy Behar available?) Only two African Americans got face time.

When it comes to their sources of news, too many Americans live in “silos,” protected from contrary views. We’d do better, learn a bit more, by listening to some opposing ideas.

You get that from Fox’s O’Reilly, not MSNBC’s Olbermann.

NBC shills for Obama: Gingrich must be racist after mentioning food stamps

Would the last honest reporter please turn on the lights?

Boehner: There will be no tax increase … on anyone

Bridgeport Mayor on Governor’s race: Every vote must count, except those...
Scroll to top