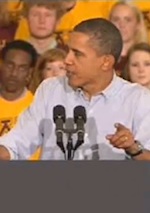 He’s thrown another change up. This is kinda of like watching one of my alt country singers perform. The greatness of a live performance is the performer never performs the same song the same way twice. Yes, the theme is the same … but the ending is always different. In other words … this is what change looks like.

For instance, over the weekend in Reno the President likened the Republicans to law breakers. But then in Minnesota and again last night in Rhode Island … the President dropped the law breaking stuff and moved on to putting the Republicans … “in the back seat”. Huh? Did he just say we just regular old folk have to sit in the back seat? No. Really?

I like the way he says the middle class can sit in the front seat. No thanks, not if he’s driving, thank you.

Trust me. These will be collectors items some day.

$1 trillion not enough – another $500 billion in the works

Run! Run as fast as you can … from Obama and Pelosi
7 replies

Governor Moonbeam has a Flashback
Scroll to top